This guy stole a joke of mine. Word-for-word. (And as you can see in the time stamp, mine came first) 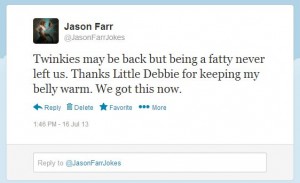 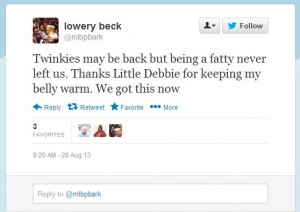 I’ve heard comedians talk about this a lot lately and now that I’ve had a joke stolen from me I can say that they are definitely talking about it way too much.

I write a twitter joke Monday through Saturday (Sunday’s my day of rest). I don’t care if some random dude steals one of them. I’ve got another one coming tomorrow. And then another the day after that. What do I care if this guy who isn’t gonna make a dime off of it steals it? I don’t. It’s actually funny.

Though, I still say Patton Oswalt should go berserker on him. Hey, hey’s the king of standing up against IP theft. He’ll have my back right? (No. He actually probably didn’t get my tweet asking for him to release the Kraken. Then that guy stole that tweet. Just kidding.)

Nonetheless, it happened. And I honestly just laughed it off at first cause I didn’t care.

But then I saw that he has more followers than I do. And he’s even one of my followers! What the wha!?

You can steal from me if you don’t have as many followers, but if you have 80 more then you best check yo’self! Also, I’m buying ALL the Twinkies so this guy can’t have any!