So, American singer of Latin decent, Marc Anthony, sang “God Bless America” at the MLB All-Star game the other night.

Morons were up in arms. They thought it was inappropriate, un-American, and ridiculous for a Hispanic man (they all called him Mexican) to sing such a song.

Never mind the fact that even if he was Mexican it would actually be a nice thing for him to sing “God Bless America” because it would mean someone from another country was showing us honor and respect; it’s abundantly racist (or at least xenophobic) to be up in arms about it.

His profile pic makes him look pretty dopey. “Oh shucks, this girl is taking a picture with me. Guh. I just don’t know what to do with muh-self.”

This is probably the closest he’s even been to any woman he’s not related to.

Though, there is a good chance this is a cousin. Which would explain why she agreed to the picture. She has to make nice.

It may also explain how uncomfortable she is with his hand placement. Her other hand nearby as if to keep his at bay.

Aside from sadness, I see fear in her eyes.

So why am I giving him such a hard time? Cause he said this specifically: 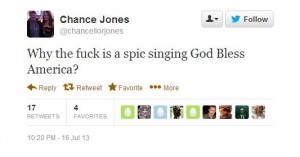 Clearly, he’s a bright one. So bright that he either didn’t bother to find out anything about Marc Anthony before commenting, like that Anthony is of Puerto Rican decent and was born and raised in NYC; or he doesn’t know the proper use of his racial slurs. At the end of the day, bona fide moron.

When the internet firestorm happened his response was, “First amendment…” and “Freedom of speech.”

You know, he does have a First Amendment right of freedom of speech. He has that as an American. Which I assume he is, otherwise, why say anything? Oh, right, he’s stupid.

If you’re going to bring up being American, you might want to actually know about America.

New York City. That’s in America. Marc Anthony’s parents are from Puerto Rico. That’s a U.S. territory. So even if he was from Puerto Rico it wouldn’t be random, in bad taste, or un-American for him to sing “God Bless America.”

You know what’s un-American? Not knowing anything about America. Idiot.

Listen, he’s not the only one to complain about this. But he is the one who got the raci-ist.

He’s also the only one to keep his Twitter up. Everyone else deleted theirs in shame. Shame, much like brains, is something Chance Jones doesn’t have any of.