I was recently flipping through a magazine in the lobby of a doctor’s office when I came across this ad: 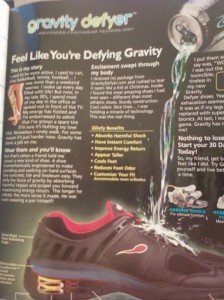 What in the world is that symbol and why??

Seriously? A sperm? What does that have to do with defying gravity or healthy footwear?

Granted, I’m sure they weren’t intending for their “swoosh” which for them I guess is a “skwoosh” or a “skweesh” or maybe “ewsh,” but they still got through several meetings before it ended up on any shoes.

How did that happen? How did not one person in that board meeting not look at the mock-ups of their shoe and say, “Uhh, Bob, that emblem looks an awful lot like a sperm. Maybe go with something else?”

How did that not happen?!? Did everyone who works there hate the owner of the company and they wanted him to look like a fool when he traveled around trying to entice investors?

I just went to their website and saw that they changed the symbol. Bob finally figured it out, I guess. But I saw that there was a “clearance” section: On Clearance

They’ve been discontinued. Swoosh! Just like that, they’re gone.